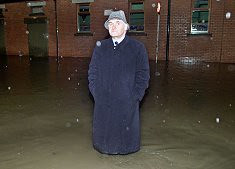 Water, water everywhere but not a drop to drink.
Posted by Unknown at 7:00 PM No comments:

This gets weirder and weirder

According to the Indo today "Senior TDs say the party will not "do a Fianna Fail" by pledging the sun, moon and stars in Enda Kenny's keynote speech to its ard fheis tomorrow night." The whole article is here

The really odd thing is this little item from my local election campaign in 2004.

If someone happens to say "We're looking out for everyone not just No.1" I'm going to taking to my bed for the rest of the weekend. Proof, it was needed I was fighting one election ahead of everyone else!
Posted by Unknown at 3:31 PM 2 comments:

Would I lie to you?

After weeks of telling us that auction politics is bad for us the Taoiseach gave us a big dollop of the bad stuff last Saturday night. Tax cuts and spending commitments galore even if many of them are reheated from 2002 and even 1997 in some cases.

Of course he mentioned absolutely no time frame for the increases or whether or not any change in economic conditions would cause the whole lot to be reneged on.

It is like visiting your in-laws who are telling you not to eat fatty food, and then they give you a huge sticky gateau for dinner. No meat, no veg, just cake. Let's take a look at the main ones in detail.


2% off PRSI: Does the Taoiseach even know what is the difference between PRSI and income tax? PRSI is meant to fund pension and social insurance related, meanwhile the party suggested they would increase €300 per week, how do they plan to fund it? And how does this link up with Seamus Brennan's comments about perhaps having mandatory pensions

And he didn't mention if employers PRSI contributions will have to increase to compensate. Can't see that as going down well with employers.

Index linking: This would be most welcome but why did his government not do that for the first 3 years of this term? And the link to increases in "wages"? What does that meant exactly. How is that measured? Is it linked to the levels in the national agreements? How does that link to the private sector? Or is it linked to the price of a haircut?

Doubling Ph.D graduates: Really? You can commit to double the numbers in the intake but you can't guarantee the output unless the government is going to go crazy with grade inflation as well as everything else.

Pensions up to €300 per week: If inflation averages 5% per year then more than half of that increase will mean nothing to pensioners as it is eating up by general price increases. And what about heating and fuel costs? If the government had committed to program of grants for changing the heating sources to renewable sources for older people who frankly need the heat. And it would reduce the cost to them of heating in the winter.

I suspect that FF strangely have walked lock, stock and barrel into a trap. Either they lied to the media, and a media that is still smarting from

It is all one big lie too many. When the FF party campaigned in 2002 they said things they knew were not true, those aren't just broken promises they were in fact lies. They knew then, and we know it now. The promises from last weekend were again lies.

And who would believe them now?
Posted by Unknown at 3:10 PM No comments:

Christ, I'm either totally prescient or I really need to set myself up as a political consultant as soon as possible. About 2 years ago I had a conversation with someone who will remain nameless for the time being and said the key message in what we should have in a slogan was "for a change" and I sent the below in a mail (which I still have a copy of) as a follow up showing how the language should be used and progressively shortened as that time went on to build resonance over time. So, the first part was to be used 6 months out, the second 3 months, and the last one in the campaign itself.

- Just thought I'd remind you of my catchy slogan for the general. Of course, if it's catchy enough you really shouldn't need reminding!

"Isn't it time it was your choice for a change?"

"Time it was your choice for a change?"

"Your choice for a change."

Fact is that without FG there will be no change in government. It has the added advantage that you can shorten it for use in different contexts. And it is also very applicable to the issues that are driving rip-off and so on in that we lack real choice in sourcing services. -

Now have a look see at the picture from FG launch event for the Ard Fheis. Here if you have an IT subs.

I'm just hoping that FG didn't go and pay some crowd of consultants actual cash money to come up with a slogan that I actually gave them just under 2 years ago.

There again the slogan is that obvious in many ways that it could have come from anywhere, hence my thoughts about my prescient. I'm going to have to do the lotto this weekend. Oh, and tomorrow the Swallows shall slay the Dragons. Yatta!
Posted by Unknown at 1:19 PM No comments:

More on the N7

I was struck by the comments in the Indo today from Evelyn Moles on the death of her sister Kate in the pile up on the N7. While she pleads with other motorists to slow and drive appropriate to the conditions in future, she is then quoted saying her sister's death could have been avoided if appropriate systems and signage were in place. It may be the paper putting words in her mouth. Full paragraph below.

"Evelyn said Kate's death could have been avoided if appropriate systems and signage had been put in place on our roads. "The Government and individual TDs need to show some leadership and put the proper systems in place that will help put an end to tragedies like this affecting families again and again.""

I'm not sure that signage was going to prevent this accident from happening. I agree that our motorway and dual carriageway system is lacking in the signage that you would find in most other European countries, but all the signs in world can't force you to ease the foot off the accelerator. Sad truth is if you hit something from the rear, cruel as it may be, you are deemed to have been at fault unless you were yourself rear ended. It seems from the early reports that pretty much everyone was going faster than they should have been on the N7 and were too close to the vehicles in front. Meaning they didn't give themselves time to react to what occurred in front of them.

As things on the road that you may come across go a fire engine is probably the brightest and loudest. If you hit a fire engine from the rear then you were almost certainly going too fast for the conditions. It is a horrible, sad waste of a young life and all the more sad for the fact that it would never have happened if she (along with everyone else) had been going that bit slower as the road conditions required on the day. I'm sure we'll see the usual lack of attention from the media when the inquests are held and the full details come out.
Posted by Unknown at 10:42 AM 3 comments:

What seems to have been missed by Cowen and other FF ministers who have chosen to defend the current stamp duty system is that those buying houses have to find the money to pay it from their deposit savings. The money to pay for the stamp duty comes out of your savings not the mortgage. So you if you're bidding on a house which many in the 2nd hand market the price can easily move from one threshold to another. Of course, the minister and the revenue know this which is why the bands from 190,000 to 382,000 move through 5 bands while the next doubling of value involves just one jump.

It might surprise the minister for finance but you're not getting squat in Dublin for under €317,500 these day. So first time buyer or not, if you've saved €32,000 as a deposit and then when you bid on a house and it goes over 317,500 you have to find another €9,525 cash in order to pay for the house. That is a lot of cash to come up with.

Of course the minister is strangely content to force young couples to move out to Meath, Kildare, Wicklow into new estates as it benefits the building industry. The fact that it means new schools have to be built and old ones in more central areas have to demolished is also good for builders.

These are the current bands.

The unfolding disaster on the N7 has got to see a rethink of the culture of driving in Ireland. 40 collisions on the one stretch of road in the matter of a few hours can't be described as anything but a disaster. I hope that those in a critical condition pull through and those seriously injured aren't too badly hurt.

However, we need to be honest enough with ourselves to ask the hard questions as to whether we have properly functioning warnings for the presence of fog on the route and to what extent driver behaviour was at fault.

The speed limit is the maximum you are supposed to drive at if the conditions are perfect. It is not an entitlement.
Posted by Unknown at 2:44 PM No comments:

Don't Panic!
Posted by Unknown at 6:46 PM No comments:

Cowen's knowledge of the housing market

I think it was informative to listen to Brian Cowen on Saturday suggesting that Fine Gael's stamp duty proposals would be some sort of Godzilla to the Irish housing market. It might have occurred to Cowen to tell this to his colleague McDowell who was the one to put the skids under the market last autumn. Cowen devoted quite a while to explain why people won't buy houses because 3 years from now! because the stamp duty would be less.

It might have slipped by Cowen's notice but people have to live somewhere in the interim period if they were to hold off buying their house and that money they pay out in rent isn't going into the equity of their house unlike what their mortgage payments would be. Telling people in advance what the government are going to do aids stability in the market, uncertainty as to what the government is going to do is what causes destabilisation.

The real people Cowen was concerned about and who might decide to hold off on buying houses was not owner occupiers but investors. FF concern about housing is more at needs of the suppliers who provide so much funding for the party and not the average Seamus and Joan looking for a home.

Of course, Cowen told us that the proposals smacked of people who had no knowledge of how the housing market worked. Well, Cowen's primary knowledge of the housing market is based on his experience as a solicitor and that would have been doing conveyancing, a field that was insisting on charging a set % fee of the purchase similar to estate agents (and how the stamp duty system operates today) despite there being no extra work involved in a €150,000 house than in a €300,000 one. Nice work if you can get it.
Posted by Unknown at 2:24 PM 1 comment: