Too scared to take the stand

I was at the SOS rally in Limerick this weekend and for all that it was interesting to see what people had to say for themselves and who turned up it was also interesting for those that couldn't bring themselves to face the music. As expected the fearless defender of his political career Willie O'Dea stayed away but John Cregan (FF - Limerick West) tried to make the case for Fianna Fail and effectively took a bullet for the party by being booed off the stage. Oddly enough RTE appear to have chosen not to report the fact that Cregan was actually booed off the stage preferring to simply say the crowd was anger at times. Timmy Dooley TD (FF - Clare) on the other hand decided to sit it out in the crowd (I guess by doing so he can say he was at the event even though he wasn't quite brave enough to face the music by taking the stand with Cregan), dressed casually as you can see in th picture below he can't claim that he was perhaps intending to take the stand but was somehow delayed by traffic and found himself so late that he didn't want to disturb those on the stand it. Even the very young in attendance thought the guff from Cregan about reporting back to the Sun-Taoiseach with our "concerns" a bit of fairytale for this hour of the day. 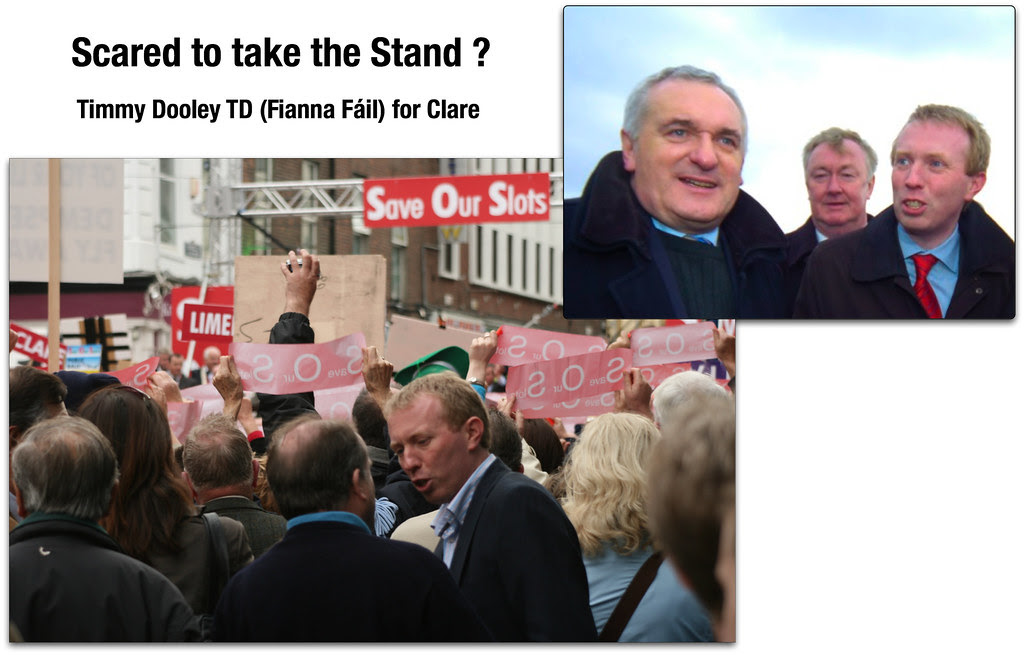 Curiously the local mayors who spoke weren't referred to by their party membership in an effort to spare the blushes of the likes of Kevin Sheehan Cathaoirleachof Limerick County a FF stalwart. Sheehan in his speech managed to blame the people of Dublin, faceless bureaucrats and most bizarrely called for people to vote against the European Treaty referendum, I guess it's one way to get people to vent before the local elections in 2009. we couldn't have people holding the government responsible for running the country now could we? and he asked the Taoiseach great man that he is after bringing peace to the north to come to Limerick to broker talks to allow us all to live in harmony.

As the Claw noted at the end some local representatives "lacked the balls" to even show their face and and someone else stated that we have no need Saturday night fighters who come Monday morning are more Minnie mouse than Mighty Mouse.