Prime Time turns its lens on Declan Ganley, burns self. 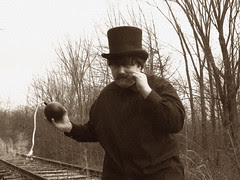 Well, that was one hell of a piece rubbish television especially compared to other investigative programs Prime Time have done in the past. The overall flavour was of the Rowdy Roddy Peeper segment in the Simpsons. Actors in shadows, dark moody music. I was half expecting a black and white clip with a damsel laid out on a train track with some high tempo piano tinkling going on in the background to surface but it didn't.

A couple of weird things did strike me during the course of it though. Katie Hannon told us the wife of the man murdered in Albania told her stuff but wouldn't do it on camera (don't they have the blurry face thing anymore) but we were lead to believe she was fine with Hannon standing outside her house quoting her, not even to voice record her? And we're to take Hannon's word for it that the wife actually said X Y or Z. That's very strange for an investigative program. Usually if you can't get something on the record then it simply isn't used. Whither Woodward and Bernstein.

Ganley also made reference in the program to a phone conversation that Katie had had with the former junior Latvian minister and which the minister (now forester! how exciting) also said that he wouldn't be adding to when she went to visit him but we didn't get to hear any of that phone conversation. Why was that? What was the content of it? Was it any cop? And yet she played a recording of a conversation in the guys office. I take it she recorded that legally, I mean some countries do allow you to record your own conversations, others require the permission of both parties. In some places you can only do it in a public place in others it is ok to enter someone's home or place of work and record without their knowledge. I presume RTe confirmed what the situation is in Latvia and I can only presume that is why couldn't she try to do the same in Albania? Or did they simply make an editorial choice.

Over the course of the show a lot was made of claims by people that claims by Ganley had been overplayed or that people's roles were more than they actually were. So while it was possible that Ganley had overstated his role in Latvia but it wasn't apparently possible that the person in Albania had overstated their role in Anglo-Adriatic or that others were overstating it now. The Albania voucher scheme sounded like all kinds of interesting weirdness but despite this tease we magically didn't get any concrete detail on what happened. We seem to have been told that the state gave out vouchers which were to be linked to priviatised state assets and Anglo Adriatic collected these vouchers but then the state didn't honour them and along the way people started trading in the vouchers. But was Anglo Adriatic involve in that trading? RTe never said, nor were we given to understand why Anglo-Adriatic were even collecting them or were they buying them? The picture presented was as clear as soft-focus image taken by someone with a shakey hand of a murky lake waters, at dusk, in winter, in Lapland.

So the view from the show is that Declan Ganley embellished his role in advising the Latvia government at some point in the early 90s and that some people lost money on some strange voucher scheme in Albania used to privatise, and that his company may have engaged in overreach in contract negotiations with the US CPA in Iraq.

Now I wouldn't personally be inclined to become too involved in business dealings with Mr. Ganley simply because he strikes me as too much of a shrewd operator and Kerryman that I am, we know a hoor that's too cute for us.

Overall, the program gave us nothing you could call concrete or a smoking gun, only rumours and impressions. If this is something that RTe is doing to assist in securing a Yes vote next time (something I would on balance like to see) then God help us all.

As for the talk of the Standards in Public Office. The current SIPO set up doesn't give you any real idea where the money for the major parties comes from as they simply work around it with small donations. People should read some of Elaine Byrne's articles in the IT to see what I'm talking about. There may well be questions from SIPO for Libertas to answer about funding but the question is why would Libertas be expected to provide this information ahead of all other organisations that campaigned for/against the Treaty. One can only presume that Coir and the Alliance for Europe have gotten similar letters at the same time that Libertas did or has Libertas been singled out?

Update: it now appears that Libertas are saying they have not yet received the letter that RTe showed as coming SIPO. Where did RTe get it from?
Posted by Unknown at 11:37 AM

Shocking television, yet another botched character assassination on a man who simply disputes the forced implementation of a treaty we rejected. Come on RTE, keep the rubbish flowing, with this junk you will quickly become the best source of donations for Libertas and its campaign.

It would apear from blog posts everywhere that the overall reaction is disgustat RTE behaviour and suspicion about motives. Given the failure to beat him on the Lisbon issue first time round and the failed hatchet job the primetime program was, it would appear that someone somewhere is out to get Declan Ganley and Ganley need not worry as that someone is most incompetent.

I don't think that the universal reaction was shock at rte , but rather shock at the subject of the report.

For God's sake wake up and see bravery where it rarely exists. Having being taken to the high court by Deco on liber and knowing many others he tried to stifle with his wealth, I salute katie

Bravery? It's not like she had to be James Bond and abseil down a cliff to get her interviews.

I thought the oft repeated story was that Declan was always threatening libel action but never followed through. Now you're suggesting that he does take people to court.

I personally haven't found his arguments 100% convincing and haven't voted for him but if you're going to expose someone then surely it makes sense to do the job properly rather than the very poor job that RTe made of it.